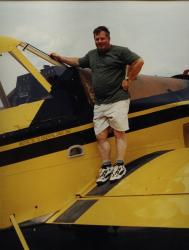 Ronald David Clowes, 62, of Grand Falls died by accident at Miramichi on Friday, Apil 23, 2010.  Born at Plaster Rock in 1947, he was a son of the late Simon and Yvonne (Arsenault) Clowes.

Ron worked for Forest Protection Ltd. where he had been employed for the past ten years.  He was a very experienced pilot with more than 13,500 hours of flying time under his belt.  That's one and a half years in the air!