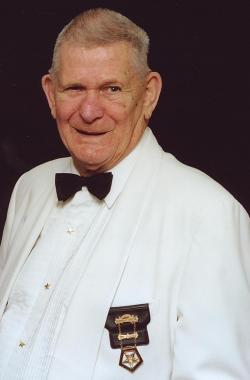 Gordon Allan Steeves, born November 20, 1929 in Wakefield, Massachusetts passed away at the palliative care unit of the Chalmers Hospital, Fredericton, NB on April 17, 2020, at the age of 90 years.

He was the son of the late Ralph Gordon Steeves and Vivian Lulu (Lutes).

Gordon was the husband of the late Marjorie Grace Jardine.

Gordon started his career as a welding apprentice immediately after graduating from Hillsborough High School, his career in welding led him to be welding instructor at New Brunswick College, 1970, Grand Falls, NB and later in Chatham, NB.

The large sundial in Grand Falls, NB was just one example of his welding expertise.

Brother Gordon was a Past Master of Colebrooke Lodge #39, Grand Falls, a former District Deputy Grand Master for the Grand Lodge of New Brunswick, a member of Luxor Shriners, Past Patron of Tobique Chapter #23, Plaster Rock and Devon Chapter #37 Order of the Eastern Star in Fredericton.  He was Past Grand Patron of the Grand Chapter of New Brunswick, Order of the Eastern Star.  He served as our Worthy Grand Patron along with his Worthy Grand Matron, Sister Ann Morton, at the Century of Stars Grand Chapter Sessions, 2000.

Gordon loved the outdoors, fishing on the Miramichi and hunting throughout NB, with his father Ralph, Uncle Alden Geldart, Brother Bob and brother’s in law, Amy and Durward.  He also loved curling, bowling, gardening, bingo and cards.

Family and children were a large part of life; he seldom missed a Steeves, Jardine, Lutes, or Beaman family reunion; he loved his grandchildren and great grandchildren; he was a Big Brother when in Chatham and an active advocate for The Shriners Children’s Hospital.

Due to the pandemic situation we are in, services for Mr. Gordon Steeves will be held privately with attendees to be contacted by the family.

Donations may be made to the Shriners Children’s Hospital, local SPCA or donor’s choice.