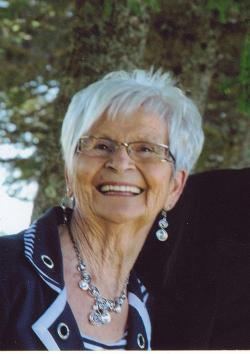 At the Grand Falls General Hospital, May 13, 2020, Mrs. Murielle Gagnon of Grand Falls passed away at the age of 90.  She was the widow of Leonard "Bert" Gagnon.  Born at Drummond in 1930, she was a daughter of the late Georges and Eva (Cote) Bourgoin.

In these difficult times, services for Mrs. Gagnon will take place privately with her immediate family in attendance.  Interment will be in the Assumption Cemetery, Grand Falls.

A Celebration of her life will be held at a later date.

The family sincerely thanks the staff of the Grand Falls General Hospital, especially palliative care, the staff of the extra-mural program and the team at the Pavillon Beau-Lieu for the excellent care she received. She was privileged to have your support and dedication during these difficult times.