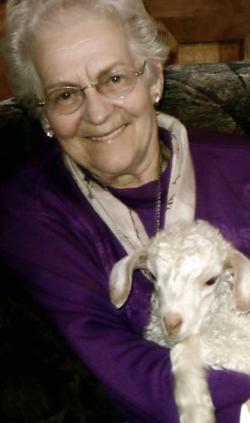 It is with great sadness our family announces that Julie Toner (nee LeBlanc) passed away peacefully in her sleep on August 10, 2020 at the Falls Villa (Grand Falls Manor).  For 61 years, she was the beloved wife of Wilfred Toner of Grand Falls. She was 93 years old. She was daughter of the late Pierre and Nazarine (Bourque) LeBlanc of Rogersville, NB.

When she was running the farm with Wilfred she looked after all the finances and the payroll. She was the field manager of all the potato pickers during the harvest. Later she worked as the secretary at the Assumption Parish Rectory. She was a long time member of the CWL. She taught grade three Catechism and English second language at the schools until the schools separated. She was an enthusiastic bingo player and she used to bowl in her younger days. Before her marriage to Wilfred she worked for Simpson's in Fredericton.

A heart felt thank you goes out to all the care workers (especially Maureen for her tender loving care) and to the nurses and doctors who looked after her.

Julie's funeral service will be held from the Assumption Roman Catholic Church, Grand Falls with her family and close friends in attendance.  Interment will be in the parish cemetery.