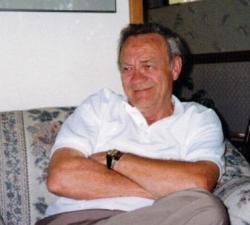 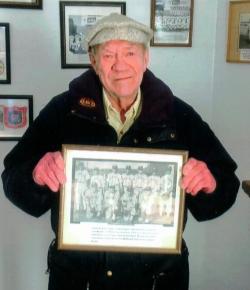 At the Grand Falls General Hospital, May 9, 2021, Mr. Lee A. Burgess of Grand Falls passed away at the age of 88 years.  Born at Grand Falls in 1932, he was a son of the late Irene (Dube) and the late Lawrence Burgess.

Lee had two sisters, Francis and Freida and two brothers, Gerald and Lawrence (Junior), who lives in Moncton.

As a youth, everywhere Lee went, he always ran. He grew up to be a very good athlete, excelling in hockey, basketball and baseball. Lee always said that sports ‘kept him out of trouble.’

Also, Lee was very dedicated to Air Cadets especially during WW II, in which his older brother Gerald served.

Lee and Rachel (Cormier) married in 1956 and they had 5 children, Jimmy, Leah, Donna, Carl and Alison.

Leah (Graeme) lives in Stellarton, Nova Scotia.  His other children are deceased.

Lee has five grandchildren: Maggie, Thomas, Laura and Emily (parents Leah and Graeme) and Samantha, daughter of Alison. As well, there are seven great-grand kids.

Lee was very proud of his wife Rachel’s accomplishments – especially with her recently being honoured with the Order of New Brunswick. Towards that honour, Lee spent a great deal of time researching and enlisting support. However, with all the recognition Rachel achieved, it cannot be overstated all the contributions that Lee made over his lifetime. Lee played a major role in acquiring the property for the Burgess School and in the subsequent fund-raising. As well, during his travels as a farm fertilizer sales rep, Lee encouraged many farmers with special needs children to attend the Burgess School.

During retirement, Lee enjoyed his morning coffee with his Burger King buddies and afternoon cards at the Legion. Lee was a very funny person with a great memory and a quick wit. He kept people on their toes and if you did some mistake, for sure he was not going to let you forget – always in a good-natured and fun way.

Lee’s Burger King and Legion buddies were great friends and always willing to assist, whether it was trimming trees or other handyman work or trips to medical appointments in Fredericton or Edmundston. Also, thanks to the people who were always dropping by with food, or just to make sure Lee was OK.

Thanks to the kind people at the Grand Falls Hospital – I am sure Lee made an impression, as he did on most people’s lives…

Funeral service will be at a later date. If you wish to make a donation in memory of Lee, please do so to a charity of your choice.