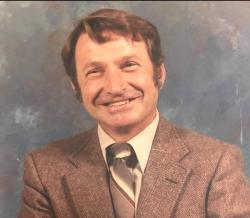 Our Dad, Dr. Denis Mazerolle, passed away peacefully this month.  A couple of us were miraculously able to get across the Canadian border and be by his side.

There is little doubt Dad was on this planet to practice medicine and deliver babies.  Often, people would point out that "He was a rare find of an intuitive doctor”.  He put his practice ahead of himself. It was never a business - it was a calling of pure sacrificial service that he felt honored to provide.

When we asked Dad why he chose to deliver babies he matter of factly smiled and replied, “Because babies make women happy”. Dad played a part for literally thousands of people by bringing life to their world and into their families.

Daily, we continue to hear stories of Dad bringing joy into peoples’ lives, whether recounting memories at the Camp with Dad’s homemade Huck Finn raft powered by a 2.5 hp motor, SLOWLY traveling  and waving to fellow camp-owners, to living “miracle babies” named after him 40 years ago! One friend fondly referred to Dad as the ”Mischief Zen Master” of the Camp.

In between his patients and deliveries, he caught some shut eye and provided for his family: children, brother, sisters, nieces, nephews and parents. Generosity was all he knew.

At his core, he lived to create joy for other people and found simple enjoyment in watching other people smile. “The Camp” on Madawaska Lake provided some of the best memories for not only his kids, but his extended family, his friends and our friends.

Dad’s spirit infected others while he savored the simple wonders in life like, the rupster rides, and bringing the potato picking kids loads of crème horns and devil dogs.

He is remembered for his smiling eyes and quiet chuckle which could lead to a full, almost choking belly laugh within moments.

The fifth of ten children of Alma and Rudolphe Mazerolle in Saint Leonard, New Brunswick, his  spirit lives on in his surviving sisters, Beatrice Kivi and Claudette Ritter, his brothers-in-law Tom and Rein, his seven children, Danielle, Marc, Paula, Lisa, Edward, Stephanie and Christopher, his grandchildren Cody, Ashley, Jordan, Ethan, Sean, his son-in-law, Brian, daughter-in-law, Beth, and many cousins, nieces and nephews.

Dad is widely loved and will be greatly missed.  We are so grateful for the dedicated staff that provided care to him during the last 19 years of his life at Foyer Notre-Dame.  A private family burial will be set when border restrictions allow.

A Celebration of Life both in Maine and New Brunswick will also be held at a future time.