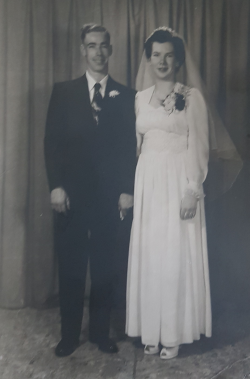 It is with great sadness that the family of Eldon G. Hersey announce his passing after a brief battle with cancer on October 31, 2021 at his home in New Denmark. He was husband to the late Lorraine E.A. Jensen.

Eldon was predeceased by his wife of 56 years, Lorraine Jensen Hersey and his six siblings, Mabel, Perley, Elmer, George, Archie and Elwood.

Eldon worked in the early years in the woods and trucking most of his life, worked at DOT Government Garage, bought his first truck in 1956, hauled pulp until 1970.  He then worked at Fraser's hauling logs for 14 years.  He also enjoyed working for McCain's harvest.  From age 60-65 he drove School Bus part time. The first car Eldon owned was a Model A Ford.

He had a great love for the outdoors, camping, 4-wheelin', and "his power saw!"  He loved the woodpile and at age 92 he put in his winter wood.

On Wednesday, Novemver 3rd, Eldon will be resting at St. Ansgar's Anglican Church in New Denmark from 1-2 at which time a funeral service will be held with Rev. Harold Boomer officiating.  Interment will follow in the adjoining cemetery.

For those unable to attend, the funeral service will be live-streamed using the link below:https://event.forgetmenotceremonies.com/ceremony?c=74bb9592-3ce7-4466-bf3f-5bd5ba98472b

A Special Thank You to the extra mural hospital staff and nurses.  Also to Cathy Brewster for all the support you have given to Eldon, Grace, Rodney and Dana.

For those who wish, donations to the St. Ansgar's Anglican Church Cemetery Fund will be greatly appreciated. 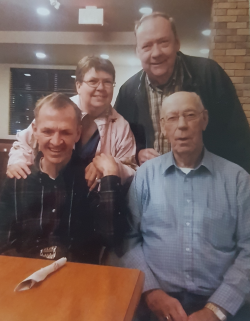 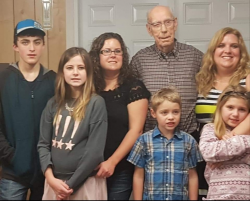