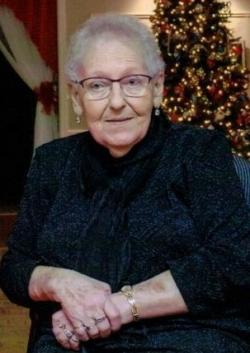 At the Grand Falls General Hospital, July 21, 2020, Miss Imelda Roberge of Saint-Andre passed away at the age of 79 years.  Born at Grand Falls in 1941, she was a daughter of the late Claude and Minnie (Rossignol) Roberge.

Imelda is survived by her son Michel Roberge (Jacqueline Caron) and grandson Marco, all of Saint-André, sisters and brothers, Stella Rioux of Grand Falls, Florence Lizotte, Edgar (Laurette) and Wilfred (Gaetanne), all of Drummond, Solange (Lance DeLeavey) of Plaster Rock and Leo (Geri Stone) of Toronto, as well as nieces and nephews.  She was predeceased by her parents and two brothers, Richard and infant brother Guy.

Her funeral service will be held from the Saint-Andre Roman Catholic Church with her family and close friends in attendance with interment in the Saint-Eloi Cemetery of Saint-Andre.

Due to restrictions imposed by the Dept. of Health, the attendees will be contacted by the family.

For those who wish, donations to the Foundation of the Friends of the Grand Falls General Hospital or the Extra-Mural Program would be appreciated by the family.