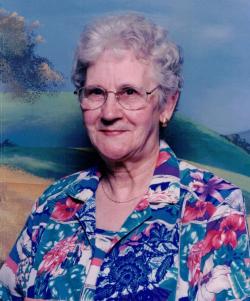 At the Grand Falls General Hospital, October 3, 2020, Mrs. Marie-Paule Theriault of Grand Falls passed away at the age of 90 years.  She was the widow of Roland Theriault.  Born at Drummond in 1929, she was a daughter of the late Antoine and Emma (Desjardins) Lebel.

Mrs. Theriault was a member of the Grand Falls Golden Age Club.  She was also a volunteer at the Falls Villa (Grand Falls Manor) for several years.

Her funeral service will be held from the St-Michel Roman Catholic Church, Drummond with her family and close friends in attendance.  Interment will be in the parish cemetery.

Due to restrictions imposed by the Dep.t of Health, attendees will be contacted by the family.