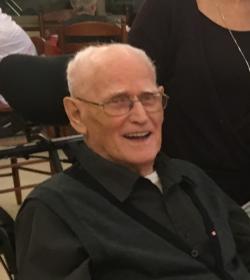 At the Grand Falls General Hospital, November 8, 2020, Mr. Robert Malenfant of Saint-Leonard passed away at the age of 98 years.  He was the widower of Laurette Lebel and had been a resident of Foyer Notre-Dame Nursing Home of Saint-Leonard.  Born at St-Cyprien, Quebec in 1922, he was a son of the late Joseph Hermenegilde and Marie-Rose (Dupuis) Malenfant.

Mr. Malenfant was a member of the Saint-Leonard Parish choir for several years.  He was also a member of the Knights of Columbus, 3rd degree of Council 2743.  He was a die-hard Montreal Canadiens fan.  Locally, he was practically an honorary lifetime fan of the Draveurs Senior hockey team, the past few years getting to the rink in his wheelchair.

His funeral service will be held from the Saint-Leonard Roman Catholic Church with his family and close friends in attendance.  Interment will be in the parish cemetery.

For those who wish, donations to the Foyer Notre-Dame Nursing Home or a charity of the donor's choice would be appreciated by the family.

for the excellent care given to their father.