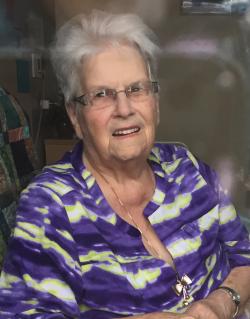 At the Grand Falls General Hospital, November 9, 2020, Mrs. Annette Ouellette of Drummond passed away at the age of 91 years.  She was the widow of Lionel J. Ouellette and had been a resident of the Falls Villa.  Born at Drummond in 1929, she was a daughter of the late Emile and Germaine (Beaulieu) Michaud.

Her funeral service will be held from the Saint-Michel Roman Catholic Church, Drummond with her family and close friends in attendance.  Interment will follow in the parish cemetery.

For those who wish, donations to the Falls Villa or a charity of the donor's choice would be appreciated.

the doctors and staff of the Grand Falls and Edmundston hospitals

as well as the Falls Villa for the excellent care their mother received.