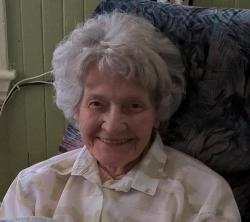 At her residence in Grand Falls, on Monday, January 11, 2021, Mrs. Georgette Leclerc passed away at the age of 93 years and three months.  She was the widow of Viateur ''Victor'' Leclerc.  Born at Drummond in 1927, she was the eldest daughter of the late Georges Godbout and the late Lucie-Anne Lizotte, who was subsequently married to the late Betrand Levesque.

She is survived by her four children, Huguette LeBlanc of Fredericton, Gilles (Margie) of Fredericton, Chantal (Maurice) of Grand Falls and Michel of Ottawa, as well as her son-in-law Richard LeBlanc of Moncton and her daughter-in-law Susan of Ontario, three grandchildren, Samuel, Sarah and Christine, seven great grandchildren.  She is also survived by three sisters, Fleur-Ange Sénéchal (late Percy) of Grand Falls, Josceline Sierra (Paul) of Connecticut, Shirley Dumas (René) of Florida, several nieces and nephews, her stepchildren (from Viateur Leclerc's first marriage to Rose-Alma Perreault), Hubert, Thérèse, Anne-Marie, Roger and Yvette, their children and grandchildren, as well as one sister-in-law, Aurore Leclerc.

She was predeceased by a sister, Huguette Brown, by her brothers, Lucien (late Jeanne) and Guilbert, by her goddaughter, Elizabeth Olmstead, by one stepson, Donald (late Noëlla) and by several nieces and nephews.

Her funeral service will be held from the Assumption Roman Catholic Church, Grand Falls, at a later date.  Interment will be in the parish cemetery.

To those who wish, please make mass offerings for the repose of the soul of Georgette Leclerc.