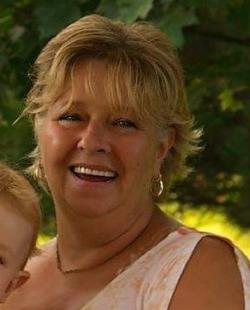 At her residence, July 7, 2021, Mrs. Colette Durepos of Drummond passed away unexpectedly at the age of 62 years.  She was the wife of Clayton Durepos.  Born at Saint-Leonard in 1958, she was a daughter of the late Roger and Gertrude (Cyr) Gervais.  After the passing of her mother, she was raised by Fred and Mattie (Bourgoin) Pelletier who became her second family.

She is survived by her husband, two children, Sherry Durepos (Wade Rattray) of St-Leonard-Parent and Danny Durepos of Sarnia, Ontario, three grandchildren, Chelsey, Dylan and Clayton, great granddaughter Emma, her sisters and brothers, Rachelle Gervais of California, Ginette Zaman of Connecticut, Nicole Ouellette of Kedgwick, Diane Turner of West Virginia, Denise Loughren of Quebec, Gerard of Connecticut, Bertin of Montreal, Daniel of Vermont, Darius of Connecticut, as well as nieces and nephews.  She was predeceased by three brothers, Enoil, Jacques and Hector.

Her funeral service will be held from the St-Michel Roman Catholic Church, Drummond with her family and close friends in attendance.  Interment will be in the parish cemetery.

For those unable to attend, the service will be video recorded using the link below:  https://event.forgetmenotceremonies.com/ceremony?c=ffc19ae4-e208-49a4-8f02-d85e0257c0cd