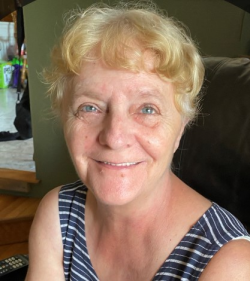 At her residence, September 4, 2021, Mrs. Mona Michaud of Grand Falls passed away at the age of 66 years.  Born at Sainte-Anne-de-Madawaska in 1955, she was a daughter of the late Thaddée and Rose (Martin) Fortin.

She was predeceased by infant twins, Johnny and Jessie in 1987, two brothers, Carmel and John Fortin.

Her funeral service will be held Friday, September 10th at 11 a.m. from the Assumption Roman Catholic Church, Grand Falls with interment in the parish cemetery.