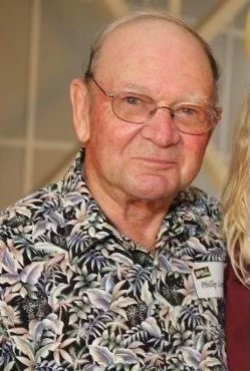 At his residence, September 11, 2021, Mr. Philippe Levesque of Saint-André passed away at the age of 93.  He was the widower of Doris Bard.  Born at Saint-André in 1928, he was the last surviving child of the late Edmond and Ernestine (Gagné) Levesque.

A career farmer, Mr. Levesque was an honorary member of the Saint-André Fire Department of which he was an active firefighter for 30 years.

He is survived by four children, Marise Charron (Roger) of Moncton, Jacques (friend Elaine) of Quebec, Paul (Lynn) of Saint-André and Marguerite L'Italien (Gaston) of Moncton, his good friend, Mrs. Florence Godreau of Grand Falls, 11 grandchildren, 16 great grandchildren plus one on the way, as well as nieces and nephews.

He was predeceased by a granddaughter, Chantal Levesque, as well as all of his brothers and sisters, Albert, Bertha, Léon, Laurette, Benoit, Colombe, Joseph, Carmen, Réal, Thérèse, Etienne, Gérald and Gérard.

His funeral service will be held Tuesday, September 14th at 4 p.m. from the Saint-André Roman Catholic Church with interment in the adjoining cemetery.

For those who wish, donations to the Saint-André Cemetery Fund or the Extra-Mural Program would be appreciated by the family.