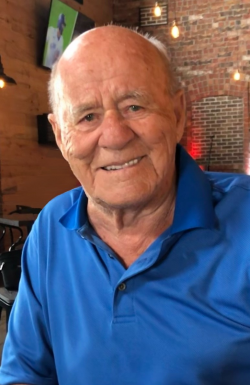 At the Grand Falls General Hospital, October 31, 2021, Mr. Louis Gagnon of Grand Falls passed away at the age of 87 years.  He was the husband of Rosanne (Carroll) Gagnon.  Born at Drummond in 1934, he was a son of the late Ernest and Eva (Desjardins) Gagnon.

Mr. Gagnon was a retired salesman who worked for Thomas Equipment Ltd. for several years.

A prayer ceremony will be held Monday, November 8th at 4 p.m. at O'Regan's Funeral Home with interment in the Saint-Georges parish cemetery.

For those unable to attend, the funeral service will be live-streamed using the link below: https://event.forgetmenotceremonies.com/ceremony?c=5bdf525a-e255-43de-847e-9ea9e17725e8

In lieu of flowers, donations to the Grand Falls Regional Food Bank would be appreciated by the family.