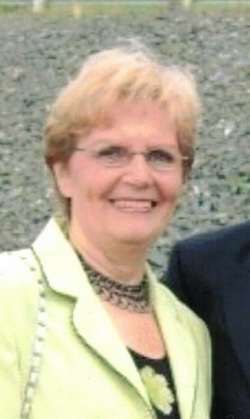 At the Grand Falls General Hospital, November 2, 2021, Mrs. Oliva Theriault of Grand Falls passed away at the age of 81 years. She was the wife of Hubert ''Bert'' Levesque and ex-wife of Hector Morin.  Born at Drummond in 1940, she was a daughter of the late Rene P. and Rachel (Ouellette) Theriault.

Since her retirement from teaching in 2000, she spent much of her time volunteering in her community.  She was also a member of the Grand Falls Golden Age Club.

Her funeral service will be held Monday, November 15th at 11 a.m. from the Assumption Roman Catholic Church, Grand Falls with interment in the parish cemetery.

For those unable to attend, the funeral service will be live-streamed using the link below:https://event.forgetmenotceremonies.com/ceremony?c=ef72f68a-ac7d-4c01-b556-789cb772a05c

In her memory, a donation to the Heart and Stroke Foundation or to a charity of the donor's choice would be appreciated by the family.