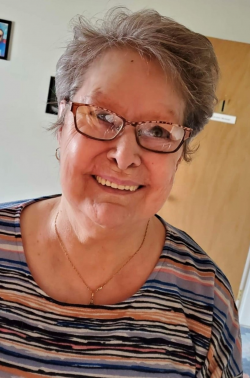 At the Edmundston Regional Hospital, November 4, 2021, Mrs. Lorraine Michaud of Saint-Leonard passed away at the age of 73 years.  She was the widow of Gilbert ''Bébé'' Michaud and had been a resident of a Special Care Home in Sainte-Anne-de-Madawaska for a number of years.  Born at Riviere-Verte in 1948, she was a daughter of the late Louis and Flavie (Ruest) Roy.

Her funeral service will be held Friday, November 19th at 4 p.m. from the Saint-Leonard Roman Catholic Church with interment in the parish cemetery.

For those who wish, donations to the Heart and Sroke Foundation would be appreciated by the family.