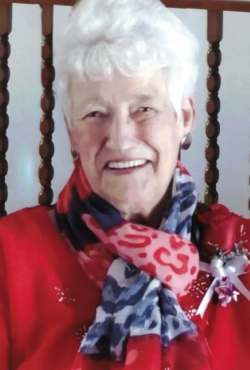 At the Grand Falls General Hospital, January 12, 2022, Mrs. Yvonne Desrosiers of Saint-Andre passed away at the age of 83 years. She was the widow of Renaud Desrosiers. Born at Saint-Andre in 1938, she was a daughter of the late Joyime and Agnes (Rioux) Castonguay.

Mrs. Desrosiers was a member of the Saint-Andre Daughters of Isabella.

She was predeceased by her husband, two sons, Edgar (Willa Jean) and infant son Joseph, granddaughters, Renée Morin and Vickie Kim Beaulieu, as well as several brothers and sisters.

Her funeral service will be held at a later date with interment in the Saint-Andre Cemetery.

the staff of the Extra-Mural Program

and the staff of Foyer Cindy Special Care Home

for the excellent care given to their mother.