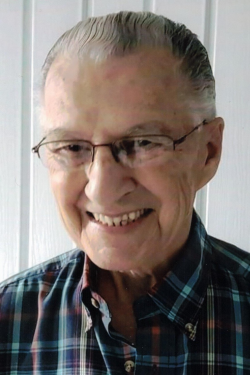 At the Grand Falls General Hospital, May 3, 2022, Mr. Omer Parent of Grand Falls passed away at the age of 93 years. Born at Saint-Leonard in 1928, he was the last surviving child of the late Pierre and Delia (Cyr) Parent.

He is survived by his friend, Mrs. Jeannette McClure, three children, Huguette (Bruno Allard) of Saint-Gabriel, Quebec, Daniel (Yvette) of Grand Falls and Maurice of Edmundston, four grandchildren, six great grandchildren, as well as nieces and nephews.  He is also survived by the McClure family.

He was predeceased by a son, Philippe, his brothers and sisters, Edgar, Amédée, Normand, Rita Couillard, Gertrude Bérubé and infant sister Norma.

His funeral service will be held Wednesday, May 11th at 11 a.m. from the Saint-Georges Roman Catholic Church, Grand Falls with interment in the parish cemetery.

The family will be receiving relatives and friends at the Saint-Georges Church on Wednesday morning from 10 to 11 a.m.