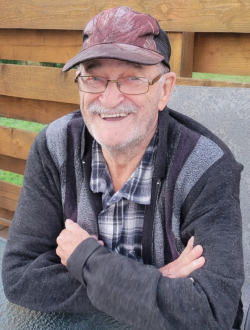 At the Edmundston Regional Hospital, May 3, 2022, Mr. Gerald Akerley of Saint-Leonard passed away at the age of 77 years. He was the husband of Diane (Levesque) Akerley. Born at Saint-Leonard in 1944, he was a son of the late Daniel and Bernadette (Cayouette) Akerley.

Gerald was a member of the Knights of Columbus, 3rd degree council 2743.

He was predeceased by twin brother Harold, brother George and sister Estelle.

Resting at O'Regan's Chapel, 83 St-Antoine Street, Saint-Leonard with visiting hours on Thursday, May 12th from 9 to 10:30 a.m.

His funeral service will be held Thursday, May 12th at 11 a.m. from the Saint-Leonard Roman Catholic Church with interment in the parish cemetery.

For those who wish, donations to the Heart and Stroke Foundation or the Diabetes Association would be appreciated by the family.