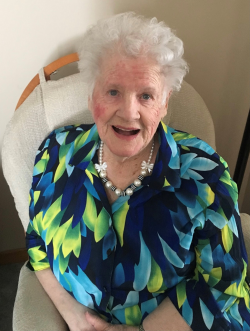 At her residence, May 5, 2022, Mrs. Annie Parent of Grand Falls passed away at the age of 93 years. She was the widow of Gérard Parent and friend of Gaston Bernier. Born at Drummond in 1929, she was a daughter of the late Arthur and Annie (Beaulieu) Bonenfant.

For several years, Mrs. Parent was a janitor in local schools.

Resting at O'Regan's Funeral Home, 515 Everard Daigle Blvd., Grand Falls with visiting hours on Wednesday, May 11th from 1 to 3:30 p.m.

Her funeral service will be held Wednesday, May 11th at 4 p.m. from the Saint-Georges Roman Catholic Church, Grand Falls with interment in the St-Antoine-de-Padoue Cemetery of St-Leonard-Parent.

For those who wish, donations to the Foundation of the Friends of the Grand Falls General Hospital or the Grand Falls Regional Food Bank would be apreciated by the family.