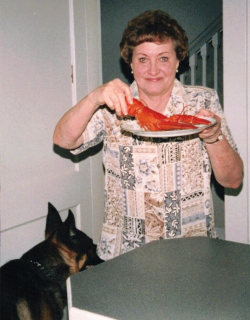 At the Grand Falls General Hospital, May 7, 2022, Mrs. Odette Levesque of Grand Falls passed away at the age of 91 years. She was the widow of Wilfred Levesque. Born at Drummond in 1930, she was a daughter of the late Octave and Alice (Bourgoin) Michaud.

A Liturgy of the Word Celebration will be held Tuesday, May 17th at 3:30 p.m. from the funeral home with interment in the Assumption Parish Cemetery, Grand Falls.

For those who wish, donations to the Foundation of the Friends of the Grand Falls General Hospital or the Grand Falls Regional Food Bank would be appreciated by the family.

The family would like to sincerely thank the staff of Foyer Jacinthe,

for the excellent care our mother received.