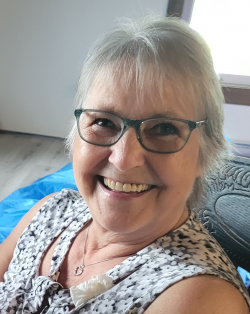 At the Edmundston Regional Hospital, May 8, 2022, Mrs. Marie-Jeanne Bourgoin of New Denmark passed away at the age of 66 years. She was the wife of Alyre Leclerc. Born at Grand Falls in 1955, she was a daughter of the late Isidore and Albina (Ouellette) Bourgoin.

She is survived by her husband Alyre, her daughter,

Her funeral service will be held Saturday, May 28th at 11 a.m. from the Saint-Michel Roman Catholic Church, Drummond with interment in the parish cemetery.

the staff of the Medical floor and the Intensive Care Unit

of the Edmundston Regional Hospital

for the excellent care given to Marie-Jeanne and François.