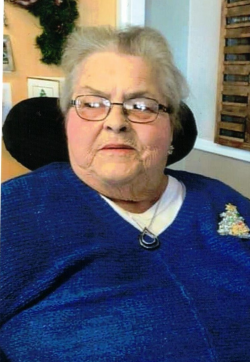 At the Tobique Valley Manor, Plaster Rock, June 15, 2022, Mrs. Donalda Gagnon of Crombie Settlement passed away at the age of 78 years. She was the widow of Robert Gagnon. Born at Grand Falls in 1944, she was a daughter of the late Alfred and Emilie (Corbin) Rossignol.

A Liturgy of the Word Celebration will be held at the funeral home on Monday June 20th at 4 p.m. with interment in the Assumption Cemetery, Blue Bell.

For those who wish, donations to the Assumption Parish of Blue Bell would be appreciated by the family.