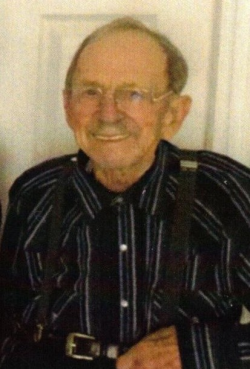 At the Grand Falls General Hospital, June 18, 2022, Mr. Henri Castonguay of Grand Falls passed away at the age of 91 years. He was the husband of Gladys Michaud. Born at Valhalla, New York in 1931, he was a son of the late Henry and Marguerite (Hebert) Castonguay.

He is survived by his wife of 67 years, Gladys, five sons and one daughter, Maurice (Anne St-Amand) of Edmonton, Alberta, Valdor of Grand Falls, Lawrence of Danbury, Connecticut, Stephen of Stony Plain, Alberta and Yves (Amanda Reeve) of Leduc, Alberta and Lisa McCormick (Dave) of Paisley, Ontario, 11 grandchildren, eight great grandchildren, sisters and brothers, Claire Pelletier of Drummond, Rachelle Cyr (Herby) of Saint-Leonard, George, Stacey and Kenneth of Connecticut, Marielle Leclerc (Maurice) of St-Eustache, Quebec and Gladys of Montreal, as well as nieces and nephews.

He was predeceased by an infant son Steve and brother Jean-Charles.

Resting at O'Regan's Funeral Home, 515 Everard Daigle Blvd., Grand Falls with visiting on Saturday from 9 to 10:30 am.

His funeral service will be held Saturday, June 25th at 11 am from the St-Michel Roman Catholic Church, Drummond with interment in the parish cemetery.