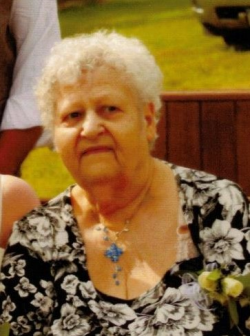 At Hotel Dieu of St. Joseph Hospital, Perth-Andover, June 29, 2022, Mrs. Alice Geneau of Blue Mountain Bend passed away at the age of 83 years. She was the widow of Emanuel Geneau. Born at Riley Brook in 1939, she was a daughter of the late Turney and Mary (Hathaway) Ferguson.

She is survived by her daughter, Susan Beaulieu (Stephen) of Moncton, three sons, Firman (Chantal) of New Denmark, Ricky (Trena) of Sisson Ridge and Randy (Hayward) of Minto, eight grandchildren, five great grandchildren, one sister, Isabel McQuade of Medford, as well as nieces and nephews.

She was predeceased by sons Robert and David, sisters Margaret McCarty and Frances Ferguson, brothers Stanley and Walter Ferguson.

Resting at the Assumption Roman Catholic Church, Blue Bell on Wednesday July 6th from 9:30 to 11:00 a.m.

Her funeral service will be held at the Assumption Roman Catholic Church, Blue Bell on Wednesday July 6th at 11:00 a.m. with Father Gilbert Doddatto officiating. Interment will be in the adjoining cemetery.

For those who wish, donations to the Diabetes Association would be appreciated by the family.