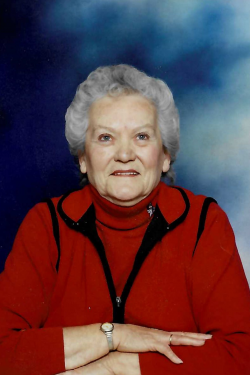 At the Falls Villa (Grand Falls Manor), June 30, 2022, Mrs. Yvette Dubé of Saint-André passed away at the age of 87 years. She was the widow of Roland Dubé. Born at Saint-André in 1934, she was a daughter of the late Alfred B. and Yvonne (Poitras) Levesque.

She was a hard working and loving potato producer's wife, who was the crew chief during harvesting season. A loving mother to her nine children, she always had a practical joke brewing in her mind. Ever the teacher, she would make sure our homework was done before play. She adored the grandchildren and great grandchildren.

She was part of the team of volunteers at her church; enumerator supervisor for several censuses; a founding member of Le Comptoir vestimentaire; she was a member of a genealogical society that published family histories for the Dubé and Levesque families in North America. She was a proud card-carrying Liberal. She also served on several village committees organising various fetes.

Her funeral service will be held Thursday July 7th at 11 a.m. from the Saint-André Roman Catholic Church with interment in the adjoining cemetery.

The family will be receiving relatives and friends at the church one prior to the funeral service on Thursday, July 7th from 10 to 11 a.m.

For those unable to attend, the funeral service will be live-streamed using the link below:https://event.forgetmenotceremonies.com/ceremony?c=12c784e6-440c-4c3b-a7bf-9db733dfcbb0

The family would like to sincerely thank Dr. Shawn Blunston and the staff of Falls Villa for the excellent care given to our mother. A special thank you also goes to Linda "Poune" Cyr and Sylvie Levesque from the Home Care Program which permitted her to remain in her own home as long as possible.