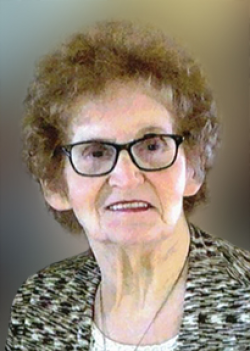 Surrounded by her family, at the Edmundston Regional Hospital, on Tuesday, January 10, 2023, at the age of 84, Mrs. Jeannine Hébert, wife of the late Mr. Martin Hébert of Grand Falls passed away.  Born in 1938, she was a daughter of the late Clovis Michaud and the late Laurie Anne (Pelletier) Michaud.

She will also be missed by an ex-son-in-law (Shawn Pelkey) and an ex-daughter-in-law (Cindy Paulin). She also leaves several nephews and nieces.

Mrs. Hébert worked for 33 years as a teacher at the Mgr-Lang school. She has taught home studies, history, and geography, among other things. She was recognized as a dedicated teacher and committed to the well-being of her students. At the time of her death, she was a member of the Society of Retired French-Speaking Teachers of New Brunswick, John-Vallillee circle.

Her funeral service will be held Monday, January 16th at 4 p.m. from the Saint-Michel Roman Catholic Church in Drummond. Interment will be in the Assumption Parish Cemetery in Grand Falls, NB.

In her memory and for those who wish, a contribution to the CNIB Foundation (Canadian National Institute for the Blind) or to a charity of your choice would be appreciated.