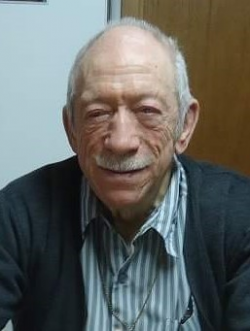 At the Grand Falls General Hospital, January 20, 2023, Mr. Roméo O. Levesque of Saint-André passed away at the age of 88 years. Born at Saint-André in 1934, he was a son of the late Onézime and Méthaïde Levesque.

Mr. Levesque was an Honorary Life Member of the Knights of Columbus, 3rd Degree of Saint-Leonard Council 2743 and 4th Degree of the 0622 Assembly.

He is survived by three brothers and two sisters, Léo (Marie-Claire) and Nelson (Diane) of Saint-André, Adelaide ''Patsy'' Graves (late David) of Roanoke, Indiana, Jean-Guy (Linda) of Ste-Anne-de-Kent and Linda Violette (Léonard) of Grand Falls as well as nieces and nephews.

He was predeceased by three brothers and one sister, Ludger (late Monique), Roger, Solange and infant brother Yvon.

His funeral service will be held Wednesday January 25th at 11 a.m. from the Saint-André Roman Catholic Church with interment in the parish cemetery.